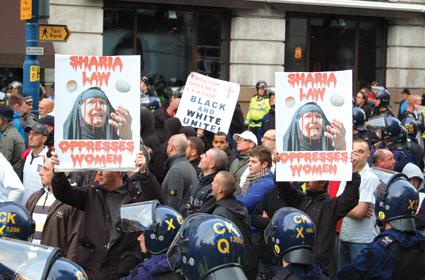 Standpoint Magazine: Strange Times as EDL Thinks of the Plight of Muslim Women

Something is inherently wrong with fascism, enough to make my skin crawl. And the last English Defence League demonstration seems to epitomise a quantum reality back in the dark ages. The EDL ‘Angels’ as they are aptly named by their ‘masculine’ counterparts, are the women’s branch of the extremist group. It seems rather odd that whilst women remain disproportionately discriminated against by men that some women would choose to fight a cause that is counterproductive to their own situation.

Since the austerity measures have been put in place by the Conservative government, it has been proven that women from socially disadvantaged backgrounds have been affected the most. With 64% of low paid workers being women, and women’s unemployment currently rising at a disproportionate rate to men’s, it appears that the EDL Angels have lost sight of the actual inequality faced in society.

A right-wing extremist group’s declaration of ‘women’s rights’ is just baffling to me. Since the 1970’s U.S civil rights movement, fighting for gender equality coincided with race, socialism and sexuality; contradicting EDL’s own fanatical stand-point. The second-wave of feminism was first and foremost a grassroots socialist movement, working towards equal rights for ALL women.

Gender politics plays an important part in how the EDL Angels see themselves within the fascist movement.

In the U.S., the 1920s Ku Klux Klan movement included a semi-autonomous women’s organization, Women of the Ku Klux Klan. The WKKK built directly on earlier women’s suffrage and temperance movements, in which racism and nativism were rampant.

The WKKK criticized gender inequality among White Protestants and described the home as a place of “monstrous and grinding toil and sacrifice” for women. This stems from a fascist quasi-feminism structure created from movements that chose to manipulate women’s role within their campaigns in order to advance a patriarchal philosophy.

It denounced Marxist feminism (“which is based on an equality which goes against nature”) but also rejected “the exploitation of traditions, which relegate women to restricted and historically obsolete roles.”

Unlike classic fascism, some religious-based movements, notably the Christian right and the Islamic right, put gender politics at the centre of their agenda. For them, reasserting heterosexual male dominance and rigid gender roles are more important than any other goals. The degree of emphasis has been put onto promoting women’s oppression. 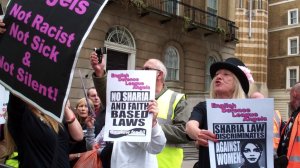 However, in a modern pseudo-civil rights movement against ‘Islamification,’ it is a tool used for competition purposes regarding which sect is more oppressive than the other to women and therefore worsening the situation for women on both sides of the spectrum. Within this type of extremism, various concepts from feminism are borrowed such as “It keeps them fearful and isolated, especially the women that it encases in the Burqa,” featured on EDL’s mission statement.

So it seems only evident that the EDL males went along to ‘protect’ their angels reiterating the stark hypocrisy with their declaration of human rights. And despite the group asserting themselves as primarily a human rights organisation, analogous to the women’s branch is the Christian Defence League’s Angel division, synonymous with the quasi-feminism structure.

Apart from the warped social political perspective; the group’s take on racism is an unusual concept. They claim to abolish “apartheid [taking] root in our own country” by means of promoting religious racism and essentially segregating communities already facing an upheaval from Islamaphobia.

“Demonization of Muslims” apparently adds nothing to their debate according to their edict which coincidentally is exactly what they are doing seen through EDL Angel individual’s own Facebook pages referring to the death of a Muslim woman. The member had said “Serves her f**king right, filthy flea ridden b***h” after the woman was strangled with her own headscarf whilst riding a go-kart. Clearly a moderate point of view for a group that alleges to be non-extremist.

The case of Hayley Wells accentuates further the contradictory views within the EDL Angel’s statute. Wells was accused of a racially-aggravated attack at an Istanbul Kebab Shop run by a Kurdish family in August 2010. Shouting “vile abuse” to the woman at the shop, they were also alleged to have assaulted the woman. Gareth Warden, for the Crown Prosecution Service, had said the group had been drinking at a local pub, near the shop.

Mr Warden said: “Kelly Watterson is alleged to have then thrown a glass into the shop which shattered. A baby and a 14-year-old were in the shop at the time.” Reiterating EDL’s statement regarding protecting Muslim women and children from “the denigration and oppression” of Islam seems to only apply in theory and not practice.

I am unsure why the EDL seem to be coy when it comes to extremism as if it is the first time to arise. Ironically, the original English Defence League at its peak period went onto being the largest empire known to history. Consequently, if the EDL want to understand how Britain has come to exist as a multi-ethnic society; they should look to the country’s own neo-colonialist, imperialist and some ways extremist record in forming the British Empire. Thus, if the EDL Angels want someone to blame, it shouldn’t be the ones suffering alongside them.